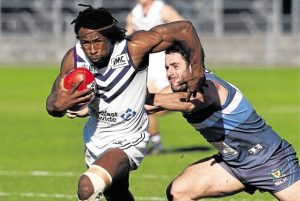 Australian Football International (AFI) is pleased to announce the appointment of Romain Greville as our AFI Caribbean Ambassador.

Romain has a Bachelor of Civil Engineering from Victoria University and a Masters of Infrastructure Engineering and Management from Monash University.

Romain is originally from Guyana, which has produced some of the most famous cricketers in the West Indies, including Clive Lloyd, Carl Hooper and Shivnarine Chanderpaul.

“I moved to Australia in 1997 and saw my first game of football (St Kilda v Sydney) in 1999 at Waverley Park, and instantly fell in love with the game.

“I then started playing for Glen Orden Football club, followed by the YCW Stone Cats in the MPNFL, receiving an invite to complete a pre-season with the Dandenong Stingrays.

“I am excited about the opportunity to build on the established sporting links between Australia and the Caribbean. We already share a love of cricket, and hopefully we can share a love of footy as well.”