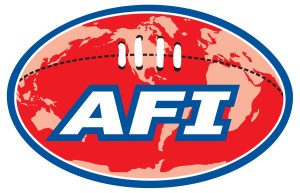 It has been a challenging few months for many sports around the world, as Covid-19 restrictions have forced many clubs and leagues to delay or cancel their seasons.

We have not been immune, with our inaugural AFI World Cup in Melbourne being pushed back from April to September 2020.

However, every cloud has a silver lining, and we have used this opportunity to undertake a strategic review of our organisation and vision. This has included an extensive rebuild of the AFI website.

As a result we are pleased to announce an exciting new era for our sport, with the ultimate goal of having Footy 9s included in the 2040 Olympic Games.

An important part of our strategy is to develop links between Australia’s multicultural communities and their respective homelands.

The 2016 Census reveals that nearly half (49 per cent) of Australians were been born overseas or one or both parents were born overseas. Australians come from more than 200 countries and speak over 300 languages.

AFI has had great success in developing strong people-to-people links through programs such as the Harmony Cup. Our aim is to build on and enhance these links moving forward, creating a global network of participants and stakeholders.

If our great game is to become truly global, we must be bold and embrace innovation. We must aim high and start sowing the seeds for Footy 9s to become an Olympic sport.

Of course, there will be the naysayers that will laugh and scoff at the idea. But is it so far-fetched? The IOC has recently added 5 new sports to the Olympic program, including skateboarding, sports climbing and surfing.

Footy 9s can do this as well, as long as we take a long-term view. We will not become an Olympic sport soon, but if we start sowing the seeds now we can reap great rewards in 20 years time.

A good example is Rugby 7s. World Rugby has done a great job in getting a modified version of rugby union into the Olympics. A whole generation of young people saw Rugby 7s being played in Rio. The possibility of playing in the Olympics will be a great carrot for them to take up a new sport.

We often claim that Aussie Rules is the greatest sport on the planet. If we make it much easier for people all over the world to play our great game, that claim can finally become a reality.