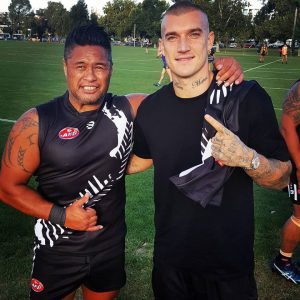 Australian Football International (AFI) is delighted to announce the appointment of Matiu Makiha as our AFI Pacific Ambassador.

From a rugby union background, Matiu represented New Zealand at the AFI World 9s in Melbourne in 2019. We spoke to Matiu about his journey and his plans for the role.

“Kia-ora, Malo e lelei, Talofa Lava, Bula Vinaka, Kia-orana and Aloha! Based in Melbourne, I am originally from the Hokianga and Bay of Islands area in New Zealand. I come from a farming background and graduated from Waikato University in Hamilton, with a Bachelor of Arts in Teacher Education.

“I am currently working as a VET-FITNESS PT/PE Teacher at Parkville College in the Department of Youth Justice in Melbourne, working with juveniles kids in custody.

“I am also the Director of my Personal Training business, Colonial Warrior Fitness and Well-Being, with the sole aim of encouraging all indigenous cultures, specifically our MPI (Maori & Pacific Island) people, to live a better and healthier lifestyle. With mental health at such a high rate globally, I find that this is my way of giving back and to help those that are fighting the fight on a daily basis.

“I am very excited to be appointed to the role of AFI Pacific Ambassador and I look forward to the many exciting events that we will be introducing to our communities – locally, nationally, and hopefully on a global scale as well. With our Maori & Pacific Island people as my main focus, I hope to create a number of opportunities – including education, employment and talent – using Footy as our vehicle.”