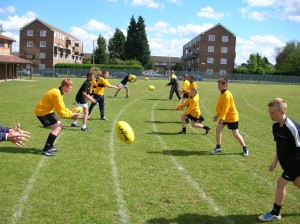 It is much healthier for children to be shooting for goal with a football in their hands, rather than spending all day shooting aliens!

A major aim of AFI is to combat the worrying increase in childhood obesity through its Aussie Rules Schools program.

Obesity, particularly in children, is emerging as one of the world’s most serious health problems. Unhealthy food, decreasing exercise and time in front of the television or playing video games are just some of the factors that have led to the alarming rise in overweight and obese children.

Being overweight increases the risk of heart disease, adult -onset (type II) diabetes, both of which place an enormous strain on the health service. The major impediments to good health are poor nutrition and physical inactivity. Aussie Rules Schools will promote a healthy lifestyle and physical activity.