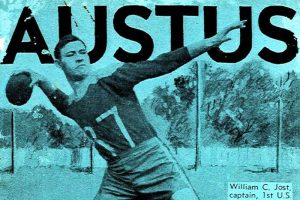 American servicemen arrived in Australia shortly after the bombing of Pearl Harbor, and by mid-1942, as many as 30,000 Americans were stationed in Melbourne.

Looking for some common ground with their Australian counterparts the Americans reached out to the locals with a series of football exhibitions to help support local war charities. Yet the locals weren’t very impressed.

They felt there was too much time in between plays, too many strange rules and formations they were unfamiliar with. Observers seemed to enjoy watching forward passes, but they just didn’t happen enough to keep people’s interest

The Australian soldiers saw the opportunity to also introduce their form of football, soon the Americans understood why the Aussies seemed so bored by American football. Australian football had much more freedom of movement and nonstop action.

It was at this point where Ern Cowley, a former Aussie Rules player, came up with a brilliant idea of integrating the two.

One of the central tenets of Australian football is the mark. Any player who catches a kick that’s 15 yards or longer can “mark the ball” and take a free kick from behind the spot of the catch. Cowley, who knew that the Americans were much better at passing the ball than kicking it, created a game based on Aussie Rules that allowed players to mark the ball after catching a forward pass.

The hybrid game of Austus allowed the servicemen from different countries to play football against each other. Matches began to draw big crowds in 1943, in part because of the game’s novelty but also because of the much more balanced competition.

The Australians continued to kick, but the Americans proved highly accurate with the pass, which wowed the spectators and made for very close and very exciting matches.

Sadly, once American forces returned home they resumed playing American football, and the Australians went back to playing Aussie Rules. Austus faded into a remote corner of history and was forgotten.