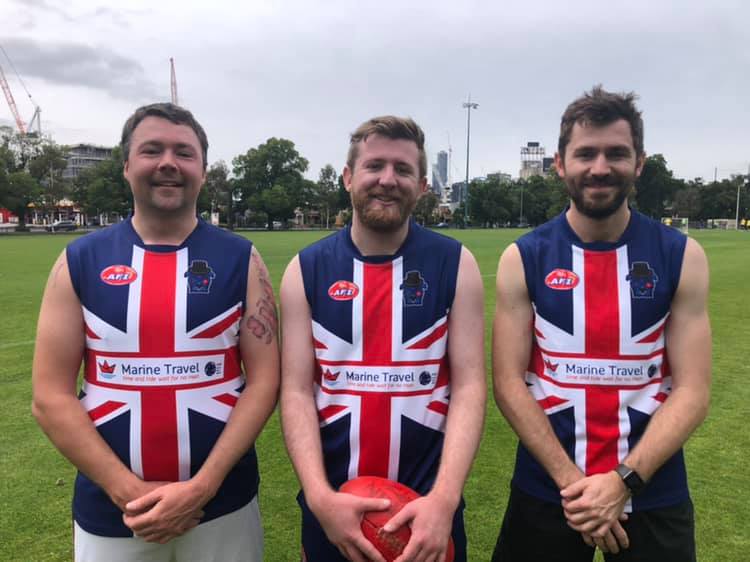 Oliver Thompson (center) with teammates from the British Bulldogs

The British Bulldogs have recently formed in Melbourne and will be one of the competing teams at the Australian Football World Cup in April 2020. Oliver Thompson is the driving force behind the team and we caught up with him recently to have a chat about his plans and his footy journey.

“I moved to Melbourne about two and a half years ago on a working holiday visa initially and fortunately I’ve been able to settle here long term. I’m originally from Gravesend in north Kent and while it may be a world away from the small town that I grew up in, I couldn’t be more happy to call Melbourne home.

“When I started playing footy with Team Harmony and AFI just over a year ago, I was the only Pom there at the time. As we slowly started to grow our numbers I thought that there should be no reason that we couldn’t form an inclusive, British team right here in Melbourne to compete in tournaments and represent our country. Although I’ve watched and followed AFL for quite a few years, until I started playing with AFI last year I had never picked up a footy before. My background is more soccer, rugby and hockey from high school so it’s taken a bit of adjustment to get used to playing the game itself but, as with all the British team, we’re slowly getting there.

“It’s been a challenge to start the process of organising the British Bulldogs but as we gain more members, things have started to get easier and we’re becoming a close knit team. I am also proud to be financially involved with the team through one of our sponsorships, as the Managing Director of Dream-Trip.com.au. I couldn’t be happier to be involved alongside our other great sponsors – The Marine Travel Company, Treats from Home & Kapitol Group. We’re looking forward to bringing on more members of the British Bulldogs and we’re gearing up for a successful 2020 and beyond.”

The British Bulldogs are currently recruiting players and supporters! If you are keen to be involved please contact Oliver Thompson via oliver@dream-trip.com.au.