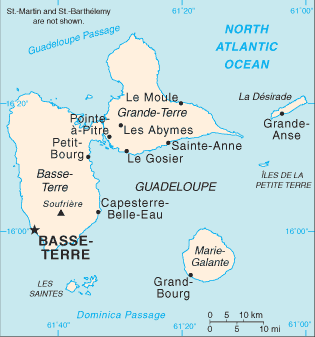 GUADELOUPE
Guadeloupe is a Caribbean island located in the Leeward Islands, in the Lesser Antilles, with a land area of 1,628 square kilometres.

Besides Guadeloupe island, the smaller islands of Marie-Galante, La Désirade, and the Îles des Saintes are included in Guadeloupe.

During his second trip to America, in November 1493, Christopher Columbus became the first European to land on Guadeloupe, while seeking fresh water. He called it Santa María de Guadalupe de Extremadura, after the image of the Virgin Mary venerated at the Spanish monastery of Villuercas, in Guadalupe, Extremadura.

Known to its one-time Carib indian population as “karukera”, or “island of beautiful waters”, the French territory of Guadeloupe is a centre of Caribbean Creole culture. French, African and Caribbean influences infuse its music, dance, food and widely-spoken patois.