Australian Football has struggled to develop outside of Australia partly because the game is highly resource intensive. A game requires the use of a large cricket oval (which generally are not available for such use), many players (44 including interchanges) and 6 officials.

To find a space big enough for 18-per-side, many international leagues play matches in the middle of nowhere, with no facilities for players or spectators.

As Footy 9s is played on smaller fields, the behind posts have been removed. Whilst the high scoring nature of Australian Football is one of its enduring appeals, having too much scoring in Footy 9s would hamper its appeal. We want to have more scoring than the other football codes, but not so much that the achievement of scoring becomes devalued. 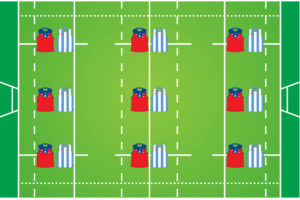 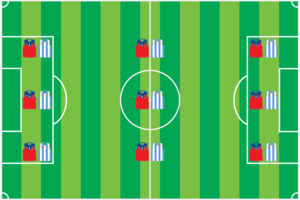