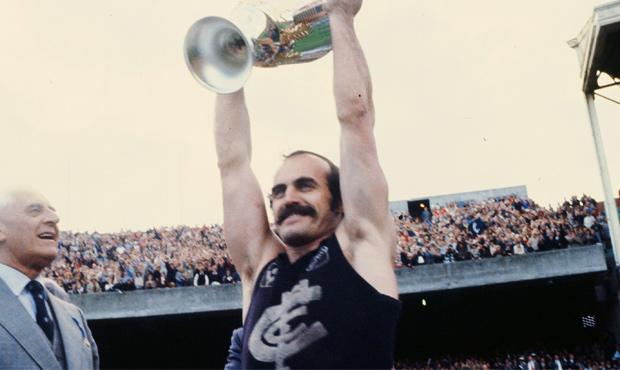 Alex Jesaulenko (born 2 August 1945) represented Carlton and St Kilda in the Victorian Football League (VFL) from the 1960s to the 1980s.

He is regarded as one of the game’s greatest-ever players and is an official Legend of the Australian Football Hall of Fame. He immortalised his reputation in the game by taking the Mark of the Century in the 1970 VFL Grand Final. In 2009 The Australian nominated Jesaulenko as one of the 25 greatest footballers never to win a Brownlow Medal.

Jesaulenko was born in Salzburg, Austria. His father, Vasil, was Ukrainian and served as a German policeman during World War II. His mother, Vera, was born in Russia, and had survived the horrors of seeing her father shot dead by German soldiers and having her first child, whom she first gave the name Alex, taken away from her when she was in a German prison camp. The child was not heard of again until over fifty years later.

The family emigrated to Australia in 1949 and spent the first six months living at the Bonegilla Migrant Reception and Training Centre. According to Jesaulenko, the family name should have been spelt Esaulenko, but immigration officials actually listed “Esaulenko” with a “J” in front, thinking that they had heard a “J” in his name.

From there, the family moved to Canberra where Vasil set up shop as a carpenter-cabinetmaker. The young Jesaulenko was enrolled at St Edmund’s College, then Telopea Park High where he played soccer and rugby union. He did not start playing Australian rules football until he was 14 years old. He began playing at the Eastlake Football Club in Canberra.

Jesaulenko made his senior VFL debut in the opening round of the 1967 season against Fitzroy at Princes Park. He would play every game for Carlton that season, one of four players to do so. In that season’s Brownlow Medal count, he would poll 15 votes to finish third behind eventual winner Ross Smith. Jesaulenko would go on to play in 4 Carlton premierships – in 1968, 1970, 1972 and 1979. Jesaulenko was selected for All-Australian honours in 1969 and 1972.

A spectacular and popular player Jesaulenko was renowned for his high marking, mercurial ground play, superb balance and goal kicking. He kicked 115 goals in the 1970 season, breaking the club record and becoming the first (and only) player to kick more than 100 goals in a season for Carlton. He went on to play in the famous 1970 VFL Grand Final against Collingwood. In front of an all-time record MCG crowd of 121,696 fans Carlton came from a 44-point deficit at half-time to win by 10 points.

Jesaulenko’s sparkling achievements were recognized not just in the football world; on 30 December 1978 he was made a Member (Civil) of the Order of the British Empire for service to the sport of Australian Rules football.

Jesaulenko moved to the St Kilda Football Club in 1980. While initially appointed as an on-field player only, Jesaulenko was then appointed playing coach when the incumbent coach, Mike Patterson, was sacked after Round 2. He played 23 games and kicked 20 goals for the Saints in 1980–1981 and stayed on for a further season as coach. Jesaulenko retired as player after Round 8, 16 May 1981. He was the last person to serve as captain-coach in the VFL.

Jesaulenko’s marking skill was perhaps best highlighted by a spectacular mark over big Collingwood ruckman Graeme Jenkin in the 1970 VFL Grand Final. The commentary has Mike Williamson shouting the now famous phrase “Oh Jesaulenko, you beauty!”. This “specky” is acclaimed by some to be the “Mark of the Century” and was the first to be recognised officially as the Mark of the Year; the medal awarded to the annual winner is called the Alex Jesaulenko Medal.