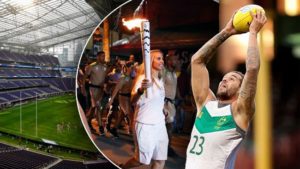 FOOTY 9s AT THE OLYMPICS

As part of AFI’s Strategic Plan, our long term aim is to include Footy 9s in the Olympics.

Specifically, our target is to have Footy 9s included in the 2040 Olympic Games.

We have been inspired by Rugby 7s. World Rugby has done a great job in getting a modified version of rugby into the Olympics. A whole generation of young people from all over the world saw Rugby 7s being played in Rio. The possibility of playing in the Olympics will be a great carrot for them to take up a new sport.

We invite all clubs, whether based in Australia or internationally, to trial and play a match of Footy 9s. It is vital that we get it right, so the feedback of your players, coaches and umpires will be invaluable.

Being able to play a footy match in any stadium in the world, will be of enormous benefit to our great game.

Please contact us if you are keen to be involved.