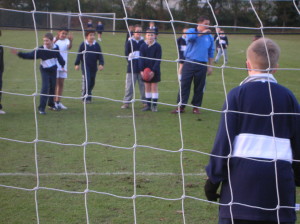 Australian Football matches are played on large cricket sized fields, featuring 18 players per team. Add another 4 reserve players per team, plus 6 umpires, and you need 50 people to play a match of traditional Australian football.

Our schools program, Aussie Rules Schools, is designed to make it much easier for participants to enjoy playing a new game, without the difficulty of trying to find a large enough field and recruit a small army in order to play.

All matches are played under the rules of Footy 9s and can be played on either Soccer, Rugby or Gridiron fields.

The reasons for developing a modified version of the game outside Australia include: