AFI’s long-term objective is to secure the inclusion of Footy 9s in the 2040 Olympic Games.

We know this is not going to happen overnight, and a lot of hard work must be done to achieve this goal. Other sports, however, have shown that it can be done.

We are keen to follow in the footsteps of Rugby 7s, which is now an Olympic sport after making its debut at the 2016 Olympic Games in Rio de Janeiro.

Footy 9s is similar to Rugby 7s in that an immediate connection is made to the sport, with added reference to the number of players on the field.

Countries
The Olympic Games are considered the world’s foremost sports competition with more than 200 nations participating. 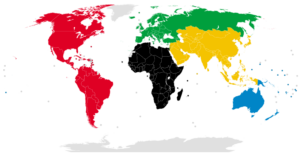 New Sports
Rugby Sevens made its debut at the 2016 Olympic Games in Rio.

In 2016 the IOC also voted to add baseball/softball, karate, sport climbing, surfing, and skateboarding for the 2020 Summer Olympics.

2040 Olympic Games
The Olympics have often included one or more demonstration sports, normally to promote a local sport from the host country or to gauge interest in an entirely new sport.

Indeed, Australian Football was included as a demonstration sport in the 1956 Olympic Games in Melbourne.

New Sports at the Olympic Games