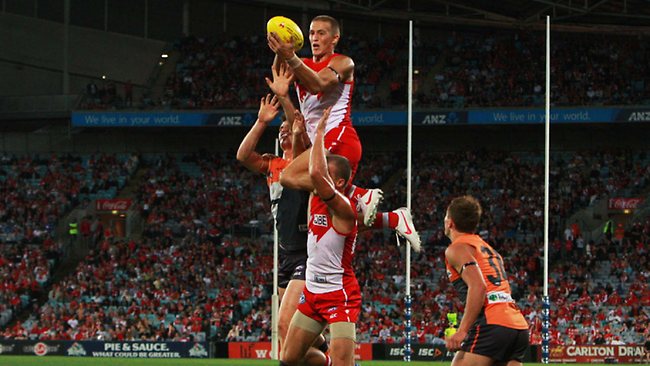 Click here for the basics of Australian Football in various Languages

Australian Football is a unique game utilising many skills. It is a favourite Australian pastime, generally regarded by the players and spectators as the greatest game of all. Spectacular high marking, penetrating long kicking and non-stop action are features which distinguish Australian Football from other football codes such as Rugby Union, Rugby League and Soccer.

The standard Australian Football ground is a grassed oval measuring between 135–185 metres in length and 110–155 metres in width, with smaller grounds being used for junior games.

The standard size football is made of leather, is oval shaped, and measures 550 mm × 725 mm in circumference. The shape of the ball produces an unpredictable bounce, which increases the amount of skill required both to kick and mark it. For young players of primary school age, smaller balls are used. 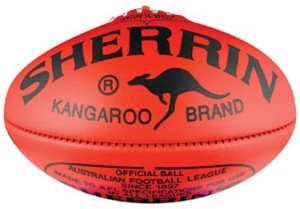 The object of the game is to score points by kicking the ball between sets of four posts equally spaced at 6.4 metres apart, at each end of the ground. The middle two are the goal posts and the outside ones are the behind posts. Six points are scored when the ball is kicked between the two middle posts without being touched by any player. A six-point score is called a goal and is signalled by the goal umpire waving two flags overhead. One point is scored when the ball passes between a goal post and a behind post (or hits a goal post, or is touched by a player before going between the two middle posts). This is called a behind and is signalled by the goal umpire waving one flag overhead. 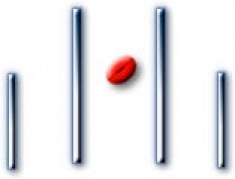 A regulation game consists of 80 minutes playing time divided into four quarters. In under age competitions, the length of a game is shortened to compensate for the players’ limited physical development. The start and end of each quarter is signalled with a siren and teams change goal ends after each quarter.

Australian Football is played by two teams of 22 players but only 18 players are on the field at any one time. The remaining 4 players may be interchanged at any time during the match. Players interchanging must enter and leave the ground through a specially marked interchange area on the boundary line.

Before the game begins, the umpire tosses a coin and the captain winning the toss is given the choice of goal ends. Although teams swap ends at the conclusion of each quarter, winning the toss can be an advantage on windy days and when weather changes are likely.

To signal the start of play the umpire blows his whistle and holds the ball high in the air. The timekeeper acknowledges the umpire’s signal by sounding the siren. Play begins with the umpire bouncing the ball, or throwing it up, in the centre circle.

Players take up their positions at the start of the game when positional opponents can be identified. At this time only four players from each side are permitted in the centre square until the ball is bounced to start the game. Other players may enter the square once the ball has been bounced.

The team in possession of the ball aims to move it downfield in the direction of their goal by kicking, handballing or running and bouncing the ball. Successful senior teams move the ball quickly with a free-flowing, non-stop style of play, by using accurate kicking to position, safe marking and sharp handballing. The advantage of this style of play is that the opposition team remains under continual pressure to defend by spoiling marks, intercepting kicks and handballs and by tackling players with the ball.

Although players are free to move anywhere on the ground without restriction, the tactics usually demand that individual players remain sufficiently close to their positional opponent to enable them to defend one-on-one when the opposition team gains possession of the ball.

The rules do not allow a player to be tackled or interfered with unless in possession of the ball. However, once in possession, a player must dispose of the ball when tackled, by kicking or handballing. The ball may be passed any distance in any direction, but the rules restrict when and how a player may be tackled by an opponent.

The umpire has the difficult task of deciding such things as when a tackle is fair and when a tackled player has had a reasonable time to dispose of the ball.