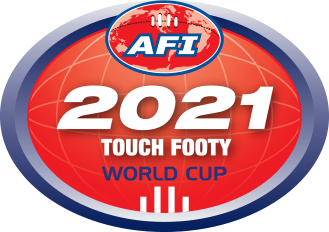 Sport has the power to change the world, the power to inspire, the power to unite people in a way that little else can…sport can create hope…it is an instrument for peace.
Nelson Mandela

Australian Football International (AFI) has held the Harmony Cup in Melbourne since 2004.

The Harmony Cup remains a very successful annual event, and is played under the traditional format of Australian Rules Football – 18-per-side and full-contact.

The large number of players required, plus the physical nature of the event, has precluded many communities in Melbourne from participating in the Harmony Cup.

As a result AFI has created a new event, the Touch Footy World Cup, to allow those communities to take part by removing the barriers of participation.

The Touch Footy World Cup was first held in Melbourne in April 2021, with each team consisting of 7 players on the field. All teams were mixed (men & women) and all matches were non-contact. The event was a great success and will return in 2022.

As with the Harmony Cup, the aim of the Touch Footy World Cup is twofold:

1. to celebrate Melbourne’s multicultural diversity and harmony, and
2. use the power of sport to break down cultural and ethnic barriers. We may come from many different backgrounds but we are all Australians.