4. Start of Play
4.1 The game is started by a jump ball between two players in the centre of the playing field.
4.2 A player may not grab the ball at the jump ball and play on. They must attempt to knock or tap the ball to another player.
4.3 After a goal, the ball is taken back to the centre and restarted as in rule 4.1.
4.4 All players are required to start in their zones before play can commence.

7. Out of Bounds
7.1 When the ball goes out of bounds by either foot or hand, anywhere along the side line, the nearest opponent shall kick (not handball) the ball back into play.
7.2 If there is doubt as to which team forced the ball out of bounds, the umpire shall throw the ball up.
7.3 No score will be allowed when kicked from an out of bounds free kick.

9. No Tackling or Rough Play
9.1 No tackling or general rough play is allowed. At no stage are you permitted to be overly physical with an opponent. This rule applies in particular to protect less experienced participants, and those who are new to the game.
9.2 Please remember all players owe a duty of care to each other. Players must approach congested situations with caution rather than hitting them at full pace.
9.3 As it is a non-contact competition the following acts are not permitted and will result in an automatic free kick:

a. shoving someone in the back
b. going for hangers (high marks) by jumping on people
c. lifting your knee in a marking contest
d. charging or running through people
e. hard shepherds (soft shepherds by putting your arms out like a basketball screen are OK)
f. holding or grabbing your opponent
g. diving on the ball in the vicinity of other players, causing them to fall over
h. tripping
i. diving in front of a player in an attempt to smother their kick

11. Marking & Safe Zone
11.1 Any player catching a ball directly from the kick of another player, no matter how small the distance, shall be awarded a mark.
11.2 If a player is about to mark the ball from a kick, a defending player is not permitted to come from behind and spoil the mark. The defending player must back off and allow their opponent to complete the mark. This is known as the safe zone.

13. Kicking Off the Ground
13.1 A player is not permitted to deliberately kick the ball off the ground.
13.2 If a player makes contact with the ball with his foot during the course of play, and it is deemed accidental, the umpire shall call ‘play on’ and play shall continue.
13.3 For safety reasons, players are also not permitted to kick the ball in the air i.e. whilst the ball is not in possession by either team. 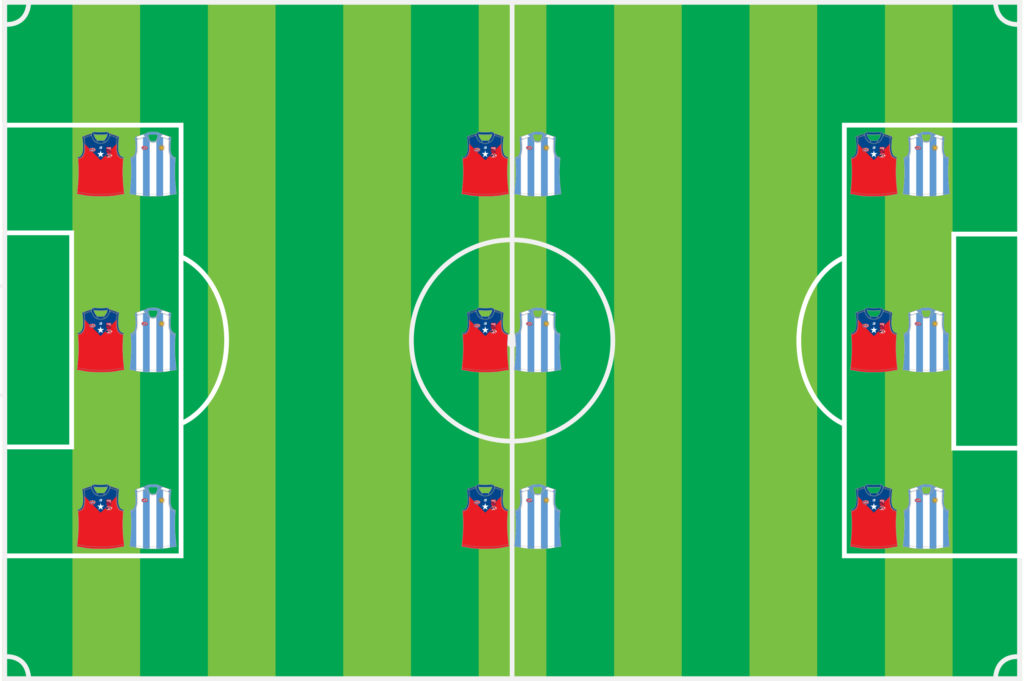